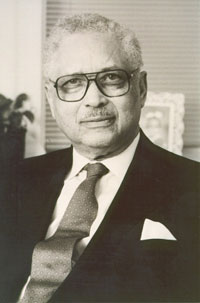 OIC was born out of the urgent needs of the people to secure education and training skills for gainful employment. Too many disadvantaged citizens were unable to vie for worthwhile positions, unable to make the career changes and plans that others would take for granted. Realizing that many of these citizens were minorities, barriers first needed to be broken down giving them access to beneficial employment. Again, it became evident that skills were needed by those for whom employment doors were opened.

To answer these cries for help, the Opportunities Industrialization Centers of America (OIC-A) was founded in 1964 by Reverend Leon H. Sullivan and four hundred concerned ministers in Philadelphia, Pennsylvania.

The first OIC was dedicated on a cold January day in an old abandoned jailhouse, renovated using the nickels, dimes and quarters of people in the community—and an anonymous grant. Industry gave its support by contributing equipment, machines and technical assistance. Finally, a program that would bring the jobs and the unemployed together was created.

Since that historic day in 1964, OIC began spreading across America. In December, 1966 just two years later, the self-help concept of OIC reached Oklahoma City, Oklahoma where the late Dr. Charles N. Atkins and a group of citizens opened the doors to the local affiliate, OIC of Oklahoma County.

There was no model that OIC could turn to for guidance. The program Dr. Sullivan envisioned would be the first of its kind. So, with the shared foresight of Dr. Atkins and others, OIC chartered its own course in developing programs that would reach those who needed education and training most: the disadvantaged members of the community who were unemployed, underemployed, without means and often without hope.

Although the programs have often been changed to provide for the needs of the citizens we serve, the Mission has always remained clear: To provide individualized services, education, and skills training to any who would need a special place—and a special staff—that could help make their dreams of a better, more prepared future come true!